The way we hold our hooks—and the reason we find one hook and handhold more comfortable or effective than another—is determined in part by the shape of our hands, the length of our fingers, and muscle memory development. Our lifestyle affects how we use our hands. Someone who swings a hammer every day will hold and use a crochet hook differently from someone who types all day. By being aware of our strengths and weaknesses, we may even be able to prevent repetitive-motion injuries.

As we go through this next section, think about your experience in using your hands, and watch what your hands and fingers do when they use a crochet hook.

6 of the Most Popular Crochet Holds & Their Variations

The two broadest categories for crochet handholds are overhand (or knife hold) and underhand (or pencil hold), but there are several variants to these holds.We’ll consider six main holding positions (by far not all the ways a crochet hook can be held) that I have observed while watching crocheters’ hands at work (which I actually do a lot). For some holds, most of the movement lies in the fingers; for others, the work is in the wrist. As you read through the holds, consider which allies most closely with your preferred handhold. If you crochet frequently, it is useful to learn more than one hold. Particularly if you are experiencing hand strain, practice the modifications listed in the Notes, including considering using a different type of hook.

This hold is named after the way we hold and use a butter knife, leading with the index finger as if we are pointing at our work. The hook is held firmly by the thumb and middle finger while the index finger extends down the hook toward the head for control. 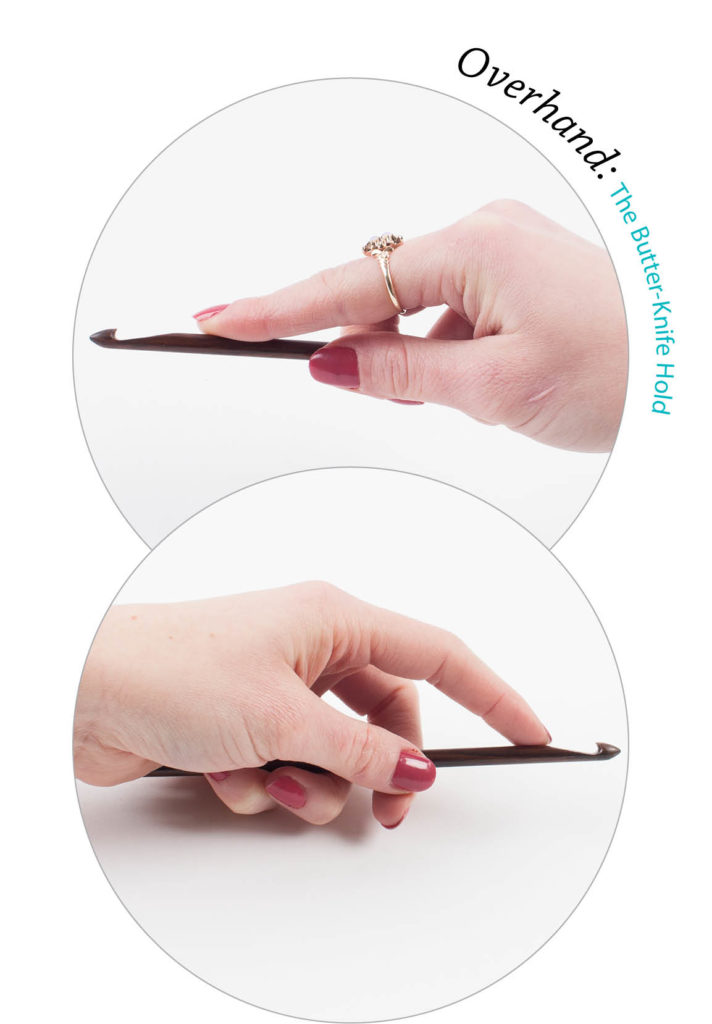 There are two sub-variations to this hold: 1. using the yarn-holding hand to wrap one’s hooks and 2. keeping the yarn-holding hand mostly still, using the dominant hand for all the work. Users who wrap their hooks use more finger work. This hold is often used by people who learned to knit before they learned to crochet; they hold a crochet hook very much like they hold a knitting needle. Whether they are “wrappers” or “nonwrappers,” crocheters who use this hold keep their fingers in the same place on their hooks without significantly shifting position. Butter-knife holders tend to choke up on the throat of the crochet hooks with their index fingers as they work.

This overhand variation gets its name from holding the crochet hook sideways while leading with the thumb, the same way someone might brandish a sword. It’s also the same way we might hold a flat-head screwdriver to pry open a can of paint. The thumb extends down the length of the crochet hook to gain leverage while the rest of the fingers curl around and under the hook. 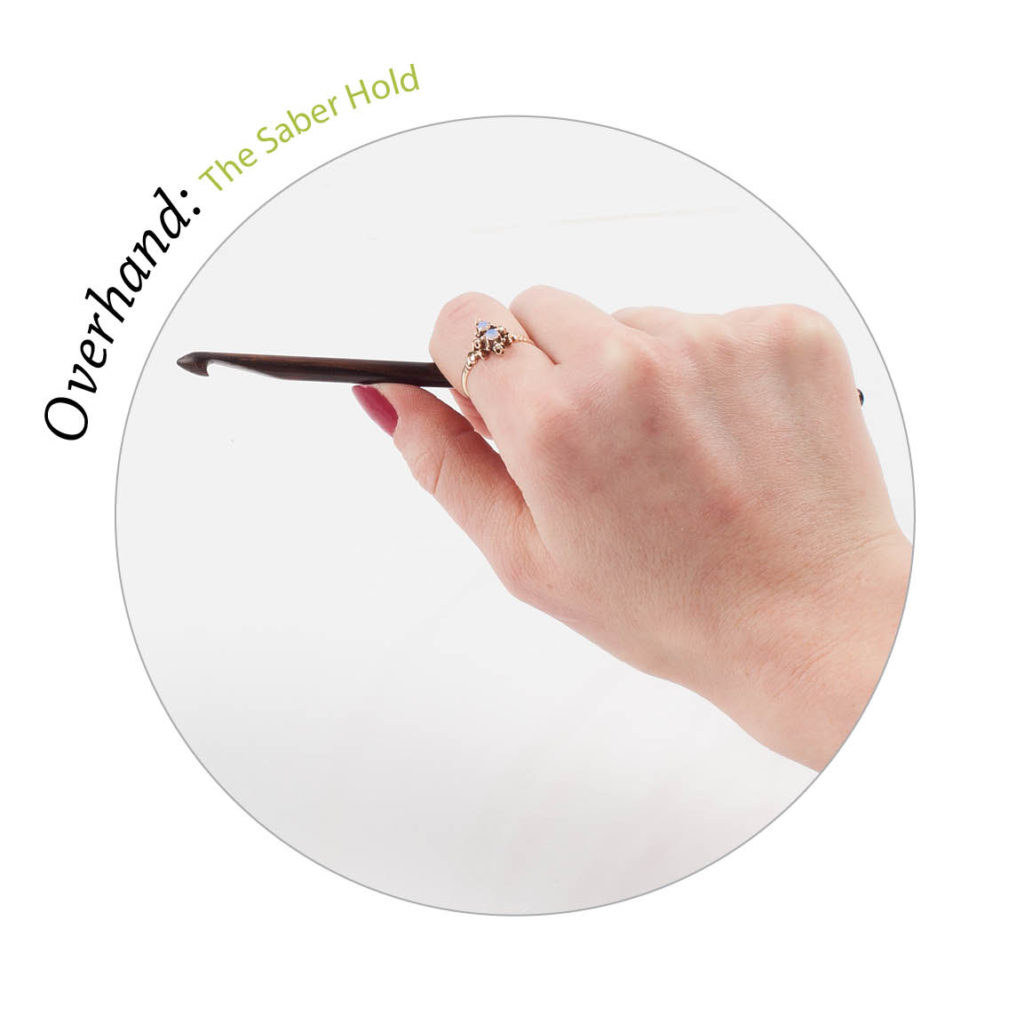 This hold relies on the thumb to provide stability to the crochet hook and uses more wrist work than finger work. I don’t see many people wrapping their hooks when they use this overhand variation. Saber-hold users don’t choke up on their hooks, especially if there is a thumb rest. Crocheters who use this hold tend to keep their fingers in the same place on their hooks without significantly shifting position.

The Piano “Claw” or Cupped Hold

This sideways overhand hold is named for the cupped “claw” shape made by the hand. Pianists will recognize this shape, because it is similar to how a hand is placed at rest upon a keyboard. It is different from the saber hold in that the thumb is not extended; instead, the hook is held on the fingertips of all five fingers, with equal attention from each finger for control. 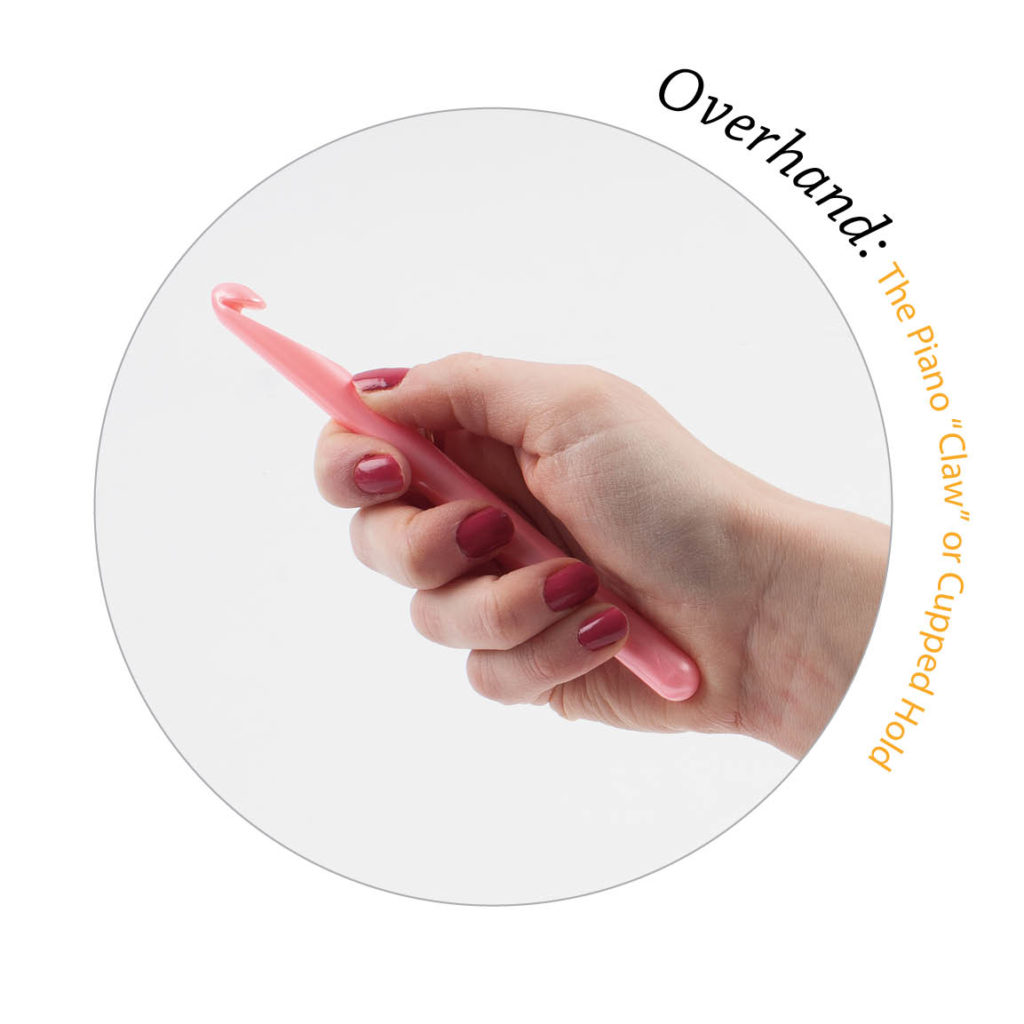 Sometimes the end of the hook is braced firmly against the underside of the palm, and sometimes the hook rests farther down the fingers into the pads than directly on the tips. Crocheters who use this hold often roll their hook between their fingers; they may even completely roll their hand around to a palm-up position while working. I’ve seen this hold among crocheters who spin fiber; they roll their hooks much the same way as they handle fiber while they spin.

The pencil grip uses the same grip taught in penmanship. This grip often employs an iron grip with fingers remaining in the same spots on the crochet hook, allowing the wrist and arm to do more of the work. The thumb and the index and middle fingers are placed equally around the hook. Variations include relying only on the thumb and index finger for grip and control. The longer the index finger, the more likely this grip will win out when an underhand grip is used. 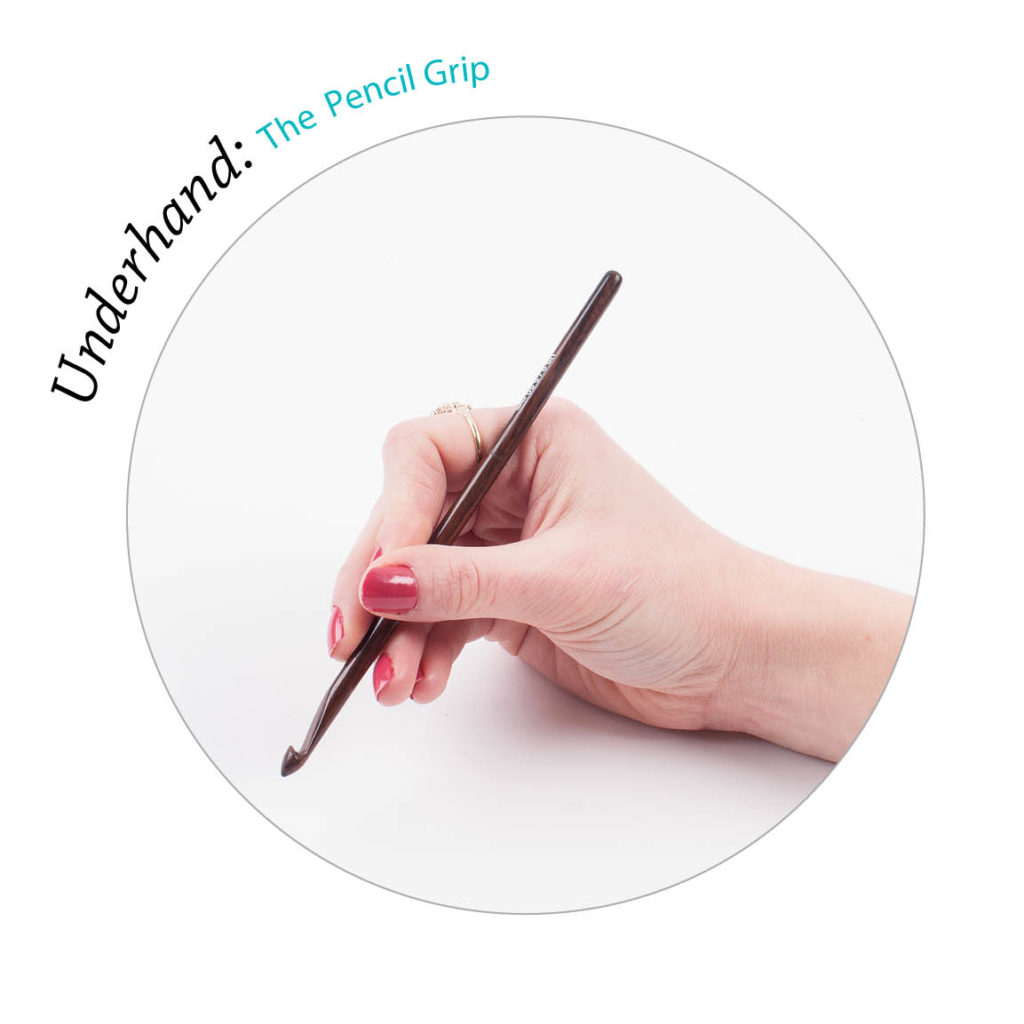 This hold changes the nature of how a hook is used. The pinky, and sometimes also the ring finger, is not used, and it may be stuck up in the air while the work is being done. The middle finger is the dominant stabilizing finger, and it may flatten against the hook even further while in motion, though some twisting of the hook may also occur as the index and thumb exert control. 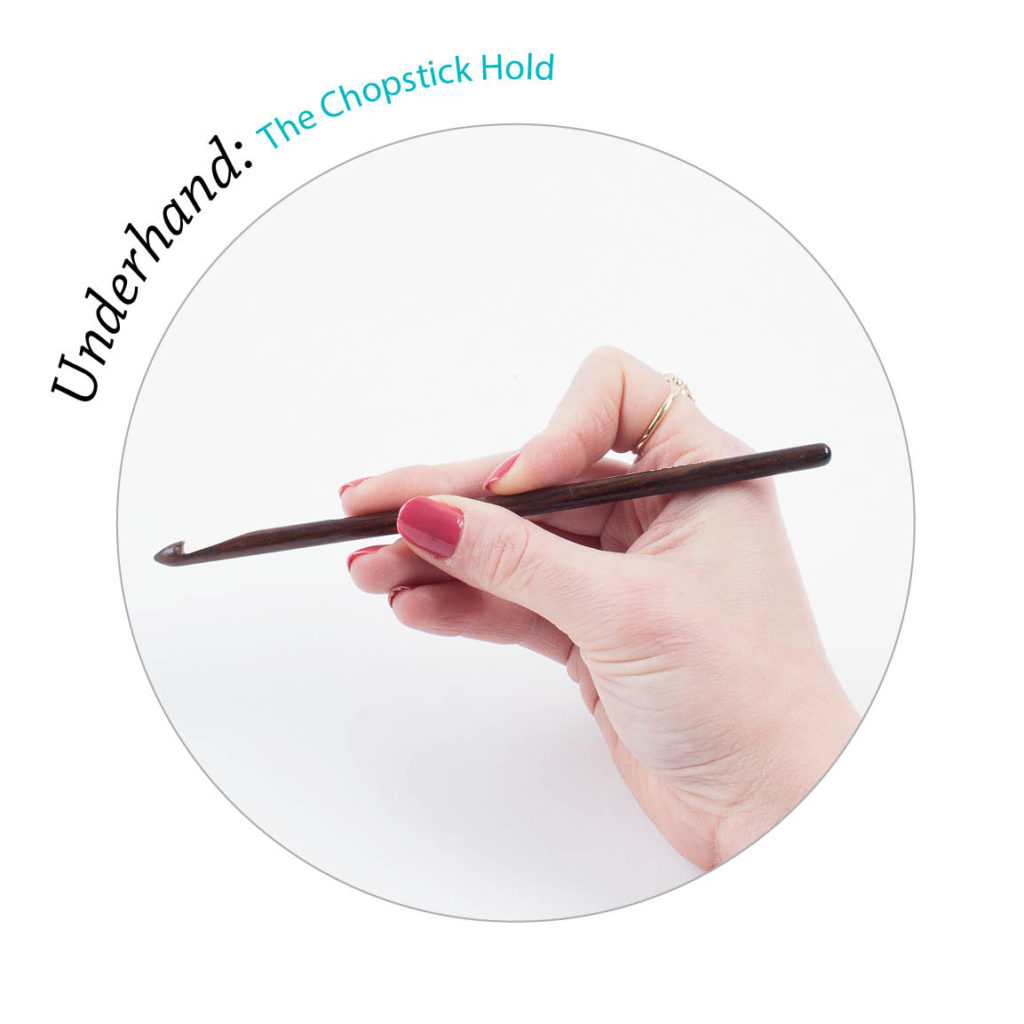 This hold is different from the pencil grip in that it is neither a “proper” nor a firm grip. As in the use of chopsticks, the crochet hook is held loosely. The grip is usually between the index and thumb, floating the hook across most of the fingers and relying on the middle finger for pivot action. The hook slides across the fingers for support and control. The longer the middle finger, the more likely this variation will be used in an underhand hold. Many users of this hold also hold part of their finished work with the same hand they use to hold their hook, while their yarn-control hand holds the rest. There is more sliding and rolling action in the hook when this grip is used. 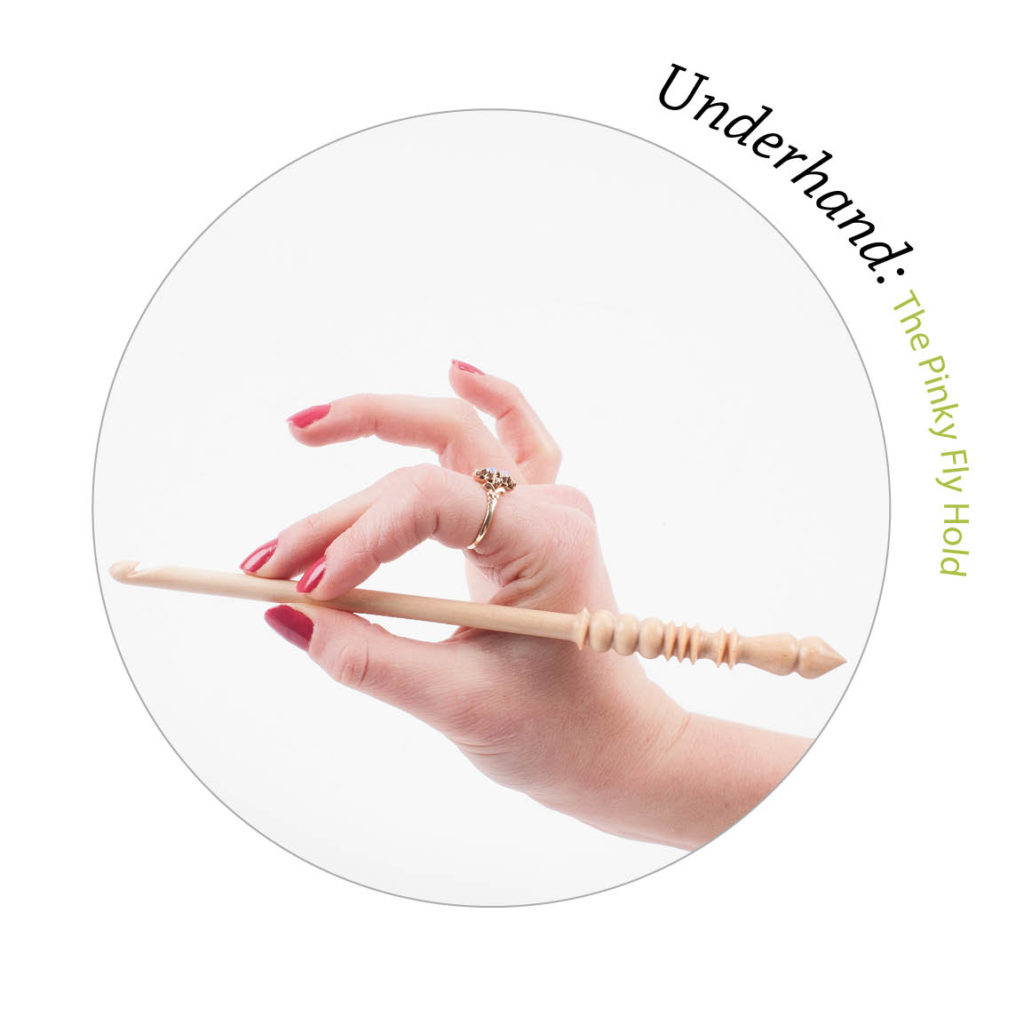 So Which Hold is Right for You?

The best hold is very individual, reliant on the size of your hands and fingers as well as your muscle memory. If your hook hold works, by all means continue using it. But if you find yourself experiencing pain or strain—in your hands, wrists, arms, shoulders, or back—try variations of your favored hold or experiment with another hold altogether. Consider, too, that a particular yarn or required gauge may call for a different hook hold.

100-Year-Old Woman Has Been Crocheting Since Age 12, Gives Every Dime of Her Proceeds Away

How to Make Tassels by Hand without a Tassel Maker

How to Crochet a Basket